11 Comments Posted by richardawarren on September 28, 2016

In 2011 I posted here on a first, rather breathless, encounter with the ‘forties paintings of Leslie Hurry. He was clearly still working well into the 1970’s (he died in 1978); I may be missing something, but I still can’t see any recent monograph – is there really no big, glossy volume on this extraordinary artist?

This lack makes Paintings and Drawings by Leslie Hurry (Grey Walls Press, 1950) still a useful source, at least, up to that point. The book’s intro is by the “prolific and proletarian” Jack Lindsay; this is sympathetic but none too informative. Lindsay wastes several pages trying to set Hurry into some sort of mega history-of-art context, but then fails to locate him as a painter within the movements and networks of his own times, as if his development were some purely personal, hermetic affair. But the book does have 38 plates, though only two are in colour; despite the black and white, it seems worthwhile to scan a few here below. (Click to enlarge.) 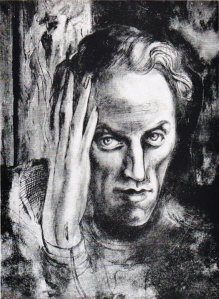 The paintings give out all sorts of echoes. Hurry may have opted to work in detachment from organised surrealism, but his relations in that respect are obvious. Absent from much of the imagery is the standard post-cubist scaffolding, so that his figures often have a ghostly flaccidity, as if their bones had been carefully extracted. They swell, contract and flop like jellyfish. This watery, or airy, looseness is reminiscent of David Jones, and the earliest image in the book, a watercolour of a Breton mass from 1939, is strongly Jones-like, both in style and content. While some later figures show rather more structure, a constant Picasso borrowing throughout is the familiar multi-angled face, though in Hurry’s hands this becomes more an image of simultaneous ambivalence than a trick of animation across adjacent moments.

To my mind, his allegorical images of famine and so forth are the least successful. When Hurry does Agony it veers into cartoony; a 1945 watercolour titled Atom Bomb is awkwardly sub-Guernica. To compensate, the scenery designs are a pleasure; they are richly fantastic, and relate closely to the baroque obsessiveness of Robin Ironside.

Jack Lindsay’s introduction to the book rounds off with his own poem, “The Bough of Sweetness,” dedicated to Hurry:

Personally, I find Lindsay’s poetry more interestingly symptomatic than successful, though this does at least represent a clumsy attempt at a verbal equivalent of Hurry’s violent conjunction of the visionary and the political – all very ‘forties, very apocalypse.

The Soldier and the Woman, watercolour & chalk, 1944


In his introduction to the book, Lindsay gives us little by way of Hurry’s biography. Born in 1909, trained at St John’s Wood and the RA School of Painting, emerging in 1931, murals, landscapes, a loss of purpose followed by a “desperate retreat into his lonely self” at a cottage in Thaxted, a spell in Brittany and Montmartre in 1938, from these periods of crisis a move into his mature work, beginning with more geometric configurations but soon evolving into more organic forms, theatre work starting with Hamlet at Sadlers Wells in 1941 – and that’s about as factual as it gets. His Wikipedia page adds not a lot more beyond the interesting detail that his father had been a funeral director, a career path the son rejected.

At the time of my previous post there didn’t seem to be much of Hurry online, but matters have since improved. Copyright restrictions at the Tate site have been lifted, so his artist page there now shows six works, including  This Extraordinary Year, 1945, which called to me when it was on the wall at Tate Britain. Much of Hurry’s work was watercolours; these don’t qualify for the Art UK site, which now offers six paintings, of which four are portraits including two variants of himself, though not the self-portrait shown in this post. Beyond these sources, a Google image search will throw up a couple of dozen additional items from galleries and so on, not counting costume or set designs. Enough to go at.

I find it hard to account for the relatively low profile of such a remarkable British painter, particularly given recent stirrings of interest in the neo-romantic phase. Hurry’s tense, highly strung images layer up beyond exhaustion those twitchy, compulsive marks and fragments until they hiss and sing in a sort of maximalist coherence, hard won against the odds by forcing overwroughtness through to a point of virtue. For once here, the road of excess does lead to the palace of wisdom.