a history of my short life as a poet (so far)

No one who stumbles across this post is likely to be interested (feel free to skip on), but for me it seems a good time to take stock of my career as a fledgling poet so far. It’s been an odd combination of exhilaration and frustration.

Three and a half years ago I went to the launch of Black Country poet Brendan Hawthorne‘s collection Slide, and was ambushed vigorously by the Muse on the way out. A few months later, having served a brief apprenticeship at monthly readings of Poetry Wednesbury – thank you, Brendan – I started to self-publish pamphlet collections of my work, which Wolverhampton Literature Development Officer Simon Fletcher advised me was a premature step. It turned out that his judgement (at least in this instance) was spot on. These pamphlets have a few decent bits, but they also contain much that I no longer care for. (Actually the drawings are pretty good, though I say it myself.) Even so, Dead Cat Bounce made number 15 in Geoff Stevens‘ Purple Patch 2009 Best Individual Collections of the Year, and Science & Magic made 20th equal in the same list. Blimey. Thank you, Geoff. Also, you’re still the only small mag editor who will publish me. So far, I’ve sold one copy of one of these pamphlets, and given away half a dozen more. Email me at rwarren99@yahoo.com, anyone, and I’ll post you one of each for free. There’s a box of them attracting dust in the corner.

Simon Fletcher gave me, very decently, some other pieces of advice as we mulled over a civilised coffee one day in the City Bar in Wolverhampton, happily chattering about Eliot, Auden and George Barker. (Though he didn’t seem to like Barker very much.) He advised me to punctuate my verse properly. (Have done.) He advised me to avoid the topic of religion. (Haven’t done.) He advised me to read Simon Armitage. (Have done, but I still don’t like most of it.) He advised me that my poems were not yet fit for the ears of his elderly audience at City Voices, though I pointed out that at least I was in the right age range myself. We shook hands, and I left.

Still undeveloped but not entirely discouraged, I found my way to Tony Stringfellow‘s monthly Wolverhampton open mic, then at the Lighthouse, but now moved to the Britannia Hotel. Simon had advised me that open mic’s were liable to turn into “car crashes”. He’d seen too many of those, he had added, reaching for the smelling salts. It seemed to me that a car crash or two might at least provide some excitement. And so they did. Thank you, Tony. You have unselfishly provided a welcome and welcoming venue for many of us with nowhere else to read. Ditto Richard Bruce Clay‘s splendid monthly do at the Holly Bush, Cradley Heath. Tony even gave me a slot on his poetry radio show at Wolverhampton Community Radio. That was before the show came off the air for a while, of course; shame – I kind of miss Wordy Worm and Bobby Binder … 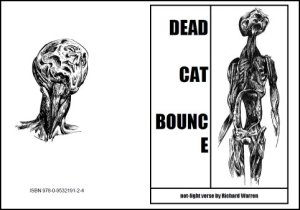 Meanwhile I found that I had achieved third prize in the revived Jack Clemo Poetry Competition for 2009, held by the Arts Centre Group, London. That’s me, at the bottom of the link, receiving a certificate from a retired bishop. I was pleased about this, as Clemo was a blistering poet, whose uncompromising Calvinist mysticism I much admire:

“The Christian nightmare holds me darling
Creatively, as I hold you.”

Whoa! Not bad for one who was deaf and blind for most of his adult life!

After the presentation, a very nice elderly man in some official position whose name I have since forgotten sat me down and offered some advice on my writing. He advised me to establish the metre firmly in the first line. (My first line was “I am my beloved’s. My beloved he is mine.” Privately, I felt that the metre was already pretty firm there. To the point of being lead-lined, actually. But never mind.) He also advised me against the use of half rhymes, which he considered did not belong in true poetry. (That would disqualify most of the big names, then.) I thanked him graciously. We didn’t shake hands.

More recently I tried my first slam, at the faintly prestigious Much Wenlock Poetry Festival 2011, and was pleasantly surprised to find myself among the four semi-finalists. Me and the excellent Dotty Bluebell were beaten only by Theo and by Emma Purshouse, the eventual winner. Gggrrrr. How many slam trophies do you need, Emma?

It’s been an uphill curve. Still is. Seems to me that it’s disproportionately hard to get your voice heard in all the competitive clamour. At the height of Eliot’s Criterion, its circulation was something in the hundreds. Today there are tens of thousands of us out here, all scribbling, all shouting, all stamping our feet, all demanding publication.

Some aspects of this seem odd. For instance, why has “performance poetry” lately veered off into a self-contained genre that is somewhere between stand-up and traditional “light verse”, with laughter the only desired audience reaction?  And what’s all this celebrity based performance stuff about, mentioning no names? I really don’t get that … Don’t you people have anything better to write about?

A number of friendly advisors have suggested that I may not yet have “found my voice”. But have reassured me that I will. I think I have. But then, I thought that before, and I hadn’t.

And anyway, what triggers this compulsion to write? Whatever it is, it may require treatment. I do know that in the last three years writing has almost obliterated my ability to draw or paint. It seems that I can’t fire up both brain hemispheres at the same time. What’s going on?

“I must tackle my dreadful table
And go on the hide and seeking hill.”