Dancers at the end of time: Isabel Rawsthorne at Walsall

A rare and recommended opportunity at the New Art Gallery Walsall (till 8 September) to view work by Isabel Rawsthorne (Isabel Lambert), model to Epstein, lover of Giacometti, muse to Francis Bacon, and so on. The biogs mention that she was a painter, but so invisible is much of her work that we are almost in Nina Hamnett or Dora Carrington territory: a woman painter whose work has been scribbled out by her network of fascinating relationships. Google-image her name (a good legacy test) and it’s the walking-dead images of her by Bacon that invade. (Some considerable distance, amusingly, from Epstein’s 1932 explodingly-breasted bronze of her – one of Jacob’s cheesier efforts.) 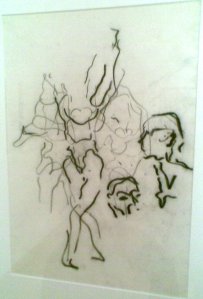 So it’s interesting indeed to see what she actually painted. “Moving Bodies” is a couple of small roomsful of drawings and paintings of dancers. (Rawsthorne hung out with Fonteyn and Nureyev.) The drawings are nervy tracings of the twitching of her eye around the figures – mere biro spasms, some of them. But you can see what she learned from Giacometti. Bodies are built up from the inside out, assuming fluid, subtle, irregular surfaces.

The paintings seem, on the whole, uncertain in comparison, some being really drawings that don’t quite know where else to go. But a couple stand out as fully resolved: Movement from La Bayadère 2 (c1966) simply hums, quite luminously. I see that Bacon bought this one, and he knew a good thing when he saw one.

In Fonteyn (“late 1960’s”) two figures like splashes of white fluid vault, a little grotesquely, across a streaky curtain of gloomy paint. This one is highly Baconesque, even down to the dotted spinal column that emerges from the upper figure. (Some of Rawsthorne’s dancers were shown in 1968 at the Marlborough, Bacon’s gallery. But one suspects that the influence was in one direction.)

Before seeing Rawsthorne’s paintings, I hadn’t appreciated the closeness between the paintings of Giacometti and Bacon, but now it seems obvious. In Rawsthorne’s work, as in theirs, fluid, exploratory figures – “transient”, “vulnerable”, “fragile” (her terms) – inhabit briefly a space defined by an uncertain abstract scaffolding – in her case, derived from the mirrors, handrail and floor grid of the ballet practice room. Post war angst gives this transience a touch of universality; we are all fleeting dancers, making our few moves before we dissolve into the shadows. So Rawsthorne’s is, ultimately, a pessimistic vision, but redeemed by its few seconds of grace. While Bacon’s vision seems stubbornly unredeemed –  a point that many of us will want to chat with him about during the eternity to come …