The darker side of Sonny

The New Art Gallery at Walsall is currently showing off its new Auerbach – a version of To the Studios from 1983, once owned by Lucien Freud, and now at Walsall via the Accepted in Lieu tax scheme. And here it is. In my humble opinion it’s not quite his best – a bit muddy and muddled in the middle – but still worth showing off, of course.

What Walsall rarely shows off are two fine Auerbach-ish works they already have by a less known painter on whom they hold a virtual monopoly – Jacob Epstein’s son Theodore Garman. Find him on the Art UK site and 23 paintings come up, all but one at Walsall.

Theo Garman, born in 1924, was Epstein’s son by his partner Kathleen Garman, though Epstein never publicly acknowledged the relationship. Due to his cheerful childhood disposition he was known as “Sonny”, but in his adult years he suffered grievously from depression, and was given a disputed diagnosis of schizophrenia. Later, as his instability deepened, he required considerable care from his mother Kathleen. As a painter he moved in an artistic environment, but was essentially a self-taught loner, admiring Matisse and Matthew Smith but dismissive of “the Sutherland-Piper-Moore claptrap”.

Exhibitions at the Redfern in 1950 and 1952 were applauded, Matthew Smith expressing “wonder, admiration, and even astonishment”; Wyndham Lewis, always an acute critic in The Listener, was more wisely measured, finding himself “overwhelmed by a rancid vegetation, tropically gigantic,” but judging nevertheless that Garman’s painterly vitality “assures this artist of a high place among his contemporaries.”

There’s no denying that the so-so landscapes and still lives of Garman’s earlier years had toughened up admirably by the late ‘forties, and his Matissean looseness had become more of a freedom than a weakness. Jennifer Gray, whose M Phil thesis on Garman sits unpublished in Walsall’s archives, but who authored the 2004 booklet on him, speculates that “his illness, far from inhibiting his creativity, may have enhanced it, allowing him to be liberated and able to explore new ideas and techniques.” Maybe so, though one wishes to avoid slipping into the suffering genius narrative here.

The two late paintings that best exemplify this late development are The Old Forge Chelsea I and II, produced in 1953, shortly before Garman’s tragic and early death. In these his deepening impasto is matched with tangled, angular, linear shapes and rich, dark, dense colours, reminiscent of Auerbach and Leon Kossoff and of their teacher David Bomberg. Auerbach and Kossoff were still students in 1953, and I’m not aware of any direct connections here, but it certainly looks as if Garman had had second thoughts about some aspects of modernist style.

The Old Forge, Chelsea I

These two paintings are in the care of Walsall but are part of the Beth Lipkin collection, rather than the Garman Ryan, and are infrequently shown. A pity. (Click on images to enlarge.)

In January 1954 Garman, in something of a disturbed state, borrowed a small statue for a still life from Chelsea School of Art and was promptly accused of stealing it. The police were called. Stephen Gardiner’s 1992 biography of Epstein gives a bare but careful account of what happened next: Kathleen, to prevent his arrest, arranged for his hospital admission, but when the ambulance arrived Theodore, thinking himself kidnapped, was overwhelmed by panic and died of a heart attack while struggling with the male nurses after injections of sedative. He was 29 years old. Despite an anonymous letter to the police complaining of “the barbarous manner in which he was virtually hounded to death” the coroner’s jury returned a verdict of death from natural causes. Later the same year Theo’s sister Esther committed suicide.

In an appendix to her rather gushy 2004 boho-romp The Rare and the Beautiful. The Lives of the Garmans, Cressida Connolly rakes over the circumstances and their associated rumours, but in the process discovers precious little.

It’s too easy to suggest that the dark angularity of these paintings is somehow expressive of Garman’s suffering or reflects the appalling tragedy that overtook the family. But the two works do seem to indicate a deepened and more complex sensibility, and may suggest something of what Garman might have gone on to achieve and sustain if he had lived. Today he is largely forgotten, his “high place among his contemporaries” sadly unassured.

5 Comments Posted by richardawarren on December 18, 2012 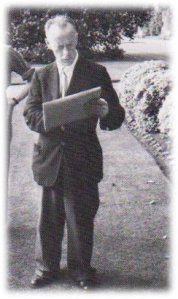 In the chapter on Gerald Wilde in his Memoirs of the Forties, writer and poseur Julian Maclaren-Ross tells a fine story of the poetry impresario Tambimuttu making collections of money and food in the pubs and cafés of Fitzrovia “for Gerald Wilde the Mad Artist, he’s starving and with no money, you know?” Meanwhile the hapless Mad Artist is locked in Tambi’s flat with instructions to produce enough paintings for a show. Predictably, the money and the leftovers never reach Wilde. But then the paintings are never delivered either, Wilde – “by now presumably paint-stained and ravenous” – smashing his way out of Tambimuttu’s flat, taking with him the contents of the bookshelves to sell to buy food.

The arrival on the Warren doormat of a copy of Gerald Wilde 1905-1986, the October Gallery 1988 Wilde show booklet, provides a fresh acquaintance with the Mad Artist. David Sylvester’s introduction points out that at Wilde’s 1948 one man show at the prestigious Hanover Gallery not one work was bought. Likewise, a lithograph commissioned in 1956 sold, from an edition of 100, not a single copy. Beyond this slim booklet, there is no monograph on Wilde, nor has any museum ever curated a show of his work.

Sylvester observes that the 1948 sale did not include his best pieces, because “he had sold too many off as he went along, sold them off for next to nothing so as to get some money to buy drink or to give away to strangers in the pub or, literally, to burn, when he chose to demonstrate his independence by throwing the contents of his wallet on the fire.” Maclaren-Ross recalls that Wilde would “simply give [his paintings] to any bystander who showed appreciation, which he once said gave him a feeling of being liberated.” But Sylvester also notes that Wilde’s work, perhaps at its peak in the late ‘forties, was simply “too tough, too demanding, too far ahead of its time” to sell.

The plates reveal that Wilde’s lithographs of the late ‘twenties were technically accomplished and quirkily observational. But by the ‘forties he had evolved the slack but scrunchy abstract expressionism (idiosyncratic and entirely un-American) for which he is best known, the later work becoming flatter, more cartoony, more Jungian. Frank Auerbach is maybe a point of contact, but only obliquely. Perhaps also Alan Davie, at least the earlier, messier stuff. Spiritually, Wilde was closest perhaps to the spontaneism of the CoBrA group – certainly a better fit than William Gear, the official CoBrA Brit, whose tasteful abstractions have always seemed a bit contrived to me.

An appreciation by William Feaver sees “no indication of artistic ambition” as “one of the strengths of Wilde’s work,” which “conforms to no professional demands or guidelines,” and “evade[s] expectation.” This uncompromising stand is very Gulley Jimson, though it’s generally recognised that Wilde could not have been the model for the reprobate painter of Joyce Cary’s 1944 novel The Horse’s Mouth, given that Cary only met Wilde five years later. But meanwhile in Jimson Wilde had recognised himself.

The booklet contains several photos of Wilde, and one sees that Alec Guinness’s Jimson, in the film of the novel, while no impersonation, was maybe a relation. In some photos Wilde appears happy, but in others his eyes have the thousand yard stare of a man who has just woken to find himself, as he put it, living in purgatory.

Which is a little unnerving, given that he had lost the use of his left eye in a childhood accident. These paintings were made by a partially sighted artist. And in fact many of them do seem to snap into view when stared at with one eye closed. The monoscopic reduction in sharpness washes out the harsh edges of some of the looser strokes, melding splatches of paint into a continuous entity, and allowing the brain to process, interpret and inhabit the image more comfortably. 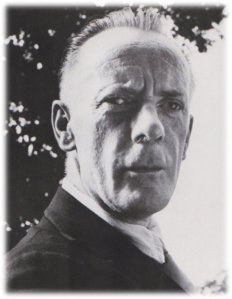 Coming to terms with a Wilde is always challenging. But hardly as challenging as it was for him to make it, we feel. Some works, particularly quick pastel or charcoal drawings, seem tentative or throwaway. The more substantial pieces seem sometimes to have been wrestled onto the surface, lines and shapes whacked around until something with conviction, but still quite alien, starts to appear. Though the images may be in that sense resolved, they are not reconciled to us; there remains a “wrongness” that, as in the best “Outsider” art, takes us to somewhere beyond, a wrongness that is ultimately right.

Writing in 1955, John Berger saw the heavy black lines of Wilde’s paintings as a grate, or as the bars of a zoo cage: “… he paints the gates (again the iron bars) on the very perimeter of the Conscious, beyond which is all the raw material which, when it is brought inside, is fashioned into our ideas of heaven and hell.” Maclaren-Ross also saw the cage: “Perhaps it was the vision of his own interior chaos that was struggling to break through the cryptic coloured patterns that enclosed it, as he had broken out of Tambi’s flat.”