5 Comments Posted by richardawarren on January 11, 2012

A word in honour of British Surrealism’s oddest couple, the wonderful Mednikoff and Pailthorpe. After Grace Pailthorpe, psychoanalyst and mother figure, and Reuben Mednikoff, painter and child substitute, fell for each other (despite – or maybe because of – a two and a bit decades’ age gap) at a party given in 1935 by Victor Neuberg (forgotten Swinburnean poet and ex-acolyte of Aleister Crowley), they embarked promptly on a decade and a half of heroically intensive mutual psychoanalysis, using automatic drawing and painting as their chosen therapeutic method; in the process they generated hundreds of extraordinary artworks and uncounted pages of notes and interpretations. Much of their delving involved regression to infantile or even intra-uterine experience, and in late 1936 they developed a shared baby-talk language called “Curucuchoo”, in which they wrote a number of texts.

When their direction was deemed to diverge from the orthodoxy then required of the British surrealist group, their summary expulsion from it was engineered by E L T Mesens, bumptious and untalented Trotskyist, self-appointed group leader and André Breton’s mini-me. In 1940 the pair fled to New York, returning to England after the war. In 1948, Mednikoff was “adopted” by his mumsy lover, changing his name to Richard Pailthorpe.

It’s hardly surprising that after fifteen years of squelchy, labyrinthine navel gazing, their project wound up as a school of art therapy; finally in the mid-sixties it descended inevitably into new-ageiness as the old-age duo took to the sub-Theosophical teachings of Alice A Bailey. Grace Pailthorpe died in 1971. Reuben Mednikoff, perhaps unable to live without her, died a few months later.

There is only one book about them – Sluice Gates of the Mind, the expanded catalogue to the 1998 exhibition of their work at the City Art Gallery, Leeds. This is well furnished with colour plates and original documents; it contains three substantial texts, but owes most to the exertions of Andrew Wilson. It’s on offer in some places (like many art books) at hopelessly silly prices, but I managed an as-new copy for a tenner.

Short of this, a quick starting point might be this breezy review at artcornwall.org. More determined readers might try the 2010 PhD thesis on the pair by Lee Ann Montanaro, downloadable as a pdf from the University of Edinburgh. It’s an academic study, so it proceeds at a stately pace, but her research has been grounded most thoroughly in primary materials from the rich Pailthorpe and Mednikoff archive at the Dean Gallery in Edinburgh, making this a highly informed piece of work. The only regret is that Montanaro cuts off her account at 1940. A curious side issue on which she sheds some light is the tangled fate of Pailthorpe and Mednikoff’s papers before they were acquired as an archive, in relation to the unpublished study of Dr David Rumney. 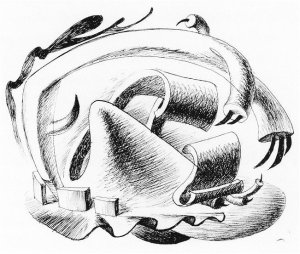 At this distance, as Freudian and Kleinian theory slide away into the Museum of Discredited Ideas, the endless and obsessive interpretations and analytical descriptions of the drawings and paintings tend to shed their fascination. The detailed identifications of murky and brutal symbolisms – mother, anus, penis, faeces etc – are extraordinary and compelling in small doses, but there’s only so much of this stuff that you might want to read. It’s the images that last. Of the two image makers, Pailthorpe, being untrained, is the lesser artist, though much of her work has a naïve/brut appeal. But Mednikoff, with the skills and experience of a commercial artist, brings an excitingly convincing plasticity to his automatic squiggles, which morph wonderfully and tonally into three dimensions, or suggest unpleasant cartoons drawn by Joan Miró on acid. 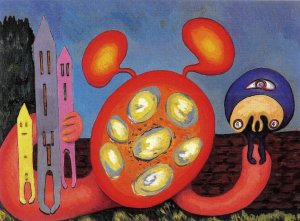 By the ‘sixties, Pailthorpe’s paintings had become rather more decorative, with loose washes of primary colour. Much happier, in fact. Which suggests a resolution of some sort at the end of all those desperate years of birth trauma and castration. One would like to think so. But in any case, what a heroic endeavour! They may have sailed on Sargasso seas, but Pailthorpe and Mednikoff were true Argonauts of the Unconscious. We should salute them, at the very least, for the near-superhuman stature of their obsessions. 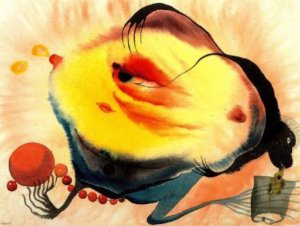