Us and Mr Jones: the Roberts meet David

It’s a small world, and once it was even smaller. In Thomas Dilworth’s new biography of David Jones (scrupulously detailed and documented and full of interesting moments) I was surprised to find this:

[Robert] Buhler sent ‘quite a number’ of younger painters to see [David Jones], including Robert Colquhoun and Robert MacBryde, known as ‘the Roberts’. They were Glasgow Scots nationalists, openly homosexual, interesting talkers, fine storytellers, warm and charming, but usually too drunk, Jones found, to converse with properly. Liking his pictures and finding in them encouragement for their own
non-abstract work, ‘they were’, Buhler said, ‘mad about him’.

(There’s more on both Jones and the Two Roberts elsewhere on this site; use the tags – down on the right – and/or the two “Colquhoun and MacBryde” page tabs – up the top.)

This was in 1943, and is referenced to Dilworth’s interviews with the painter Robert Buhler in the ‘eighties. I was surprised because neither Jones nor Buhler show up at all in Roger Bristow’s fine book on the Roberts, The Last Bohemians, nor in the ‘forties chapter (by Patrick Elliott and Adrian Clark) in the National Galleries Scotland picture book of the Roberts’ 2014 show. 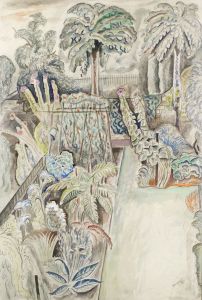 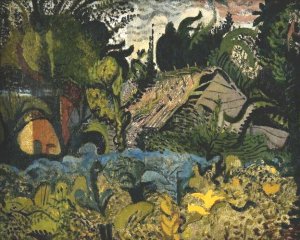 But this meeting does make sense, at least to the extent that Jones and the Roberts can be seen to share certain concerns: a folkloric sensibility, forms of Celtic heritage, the supreme value of the drawn line. In other important respects – colour, texture – they seem poles apart, but the heavy post-Picasso angularity of the Roberts’ work from about 1945 onwards was yet to come, and at this time it still employed a certain Palmerish fluidity of which Jones would have approved. 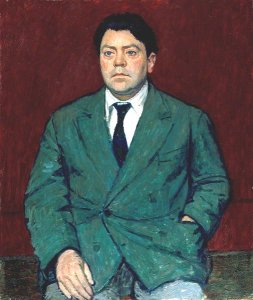 The odd man out here is the third Robert, Robert Buhler, of whom I’d not heard before. The link is Prudence Pelham, one of the great unrequited loves of Jones’ life, who became Buhler’s partner (and changed her name to his by deed poll) in 1943. Four years later Buhler became an RA; Jones later declined the offer of his own nomination, declaring that to be accepted by the RA would be ‘an absolutely disgusting betrayal of everything I ever believed in’. Buhler seems to have combined a Bohemian lifestyle with a rather safe approach to painting that must have proved popular. His Art UK page shows a large number of perfectly competent but unexciting landscapes that fall somewhere between Impressionism and the Euston Road School, plus some very brown portraits of notables, from which the sitters (Spender and Auden among them) struggle to emerge alive. An exception is a rather more animated image of the ubiquitous John Davenport, ghost writer for Augustus John, partner in parody with Dylan Thomas, and much else of
considerable interest.

2 responses to “Us and Mr Jones: the Roberts meet David”

This site uses Akismet to reduce spam. Learn how your comment data is processed.